0 558
Share
When words can’t express feelings correctly, emojis are the next best thing. There are plenty of choices in this category, each with their own sets of strengths and weaknesses.
Finding the best of the bunch comes down to smartphone size, hardware, and prioritized features. 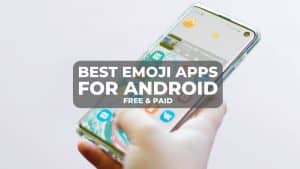 Here are the 8 best current emoji maker apps on the Play Store:

Smartphone users that want more of an iOS feel to their emoji maker app will want Elite Emoji. The software does a good job of mimicking iPhone features and presets, right down to the resizing by pinching. Laying, flipping, moving and more is supported with simple hand gestures. But the most important feature is the ability to save the finished emoji into the gallery.

With the normal sharing features of the gallery, avatars and emojis can be handled by multiple compatible apps. Options for the emojis surpass 2000 with high definition stickers.

The animated expressions are fun, and really show off the personality of the app. WhatsApp and other messaging apps are fully supported, with or without the optional keyboard.

Sometimes the originals are still the best, and that is what makes Angel Emoji Maker so interesting. It uses the traditional online app format, so is a maker that’s compatible with any phone. No matter what screen size the user has, everything autofits perfectly. The maker has the ease of use present in modern emoji apps with an alternative list of professional options.

The designer user interface is limitless in its possibilities without being too convoluted for new users. Due to the massive number of features present with the software, it is used extensively with smartphones and laptops. There are no features lost when moving between the two hardware types.

Creating a personal emoji is easy with the use of Bitmoji. The cartoon avatars look nice at any screen resolution. Instead of looking like a generic gif maker, Bitmoji creates a great avatar that looks good within any program. No third-party apps are required for creation, so it is a standalone app. Any dependencies are already included in the current version of android.

Although the primary use is with Snapchat, Bitmoji integrates well into many other apps. Users can dress up their emoji with clothes and many other accessories. The UI is intuitive, or at the very least familiar to anyone that has used an app-based emoji maker. Expressions, clothes, accessories and other animated functions are a few taps away.

Boomoji is a little bit different than the other apps on this list. It relies heavily on its huge library of gif stickers and accessories. While the actual framework for the creator is basic, it is hard to create a similar looking character.

This makes it less likely that users will run into generic versions of themselves out in the wild. Some of the more advanced features include a collaboration function with the AI camera. Boomoji has perfect integration with the BOO! Video chat messenger.

The userbase is small, but the features are admirable. For a close-knit group of friends, Boomoji and the BOO! Messenger are great apps to have on hand. Tight social media integration with other platforms also makes it an ideal choice for users that are tired of other emoji apps.

Users that like MojiPop have most likely seen the multiple ads shown on websites. It is a very flashy app that looks like a live action cartoon. With MojiPop, users will feel like they are in an actual cartoon. There is a lot of humor in each avatar, with enough animated stickers to provide weeks of fun. Access to the extra functions only takes a few taps, and the stickers are put into the right categories.

Finding a specific emotion or face takes seconds, so reaction stickers are always timely. Quick sharing is the main feature of the app, but it excels in other content related areas. Without being dependent on other apps or platforms for integration, Mojipop- can be installed on any device without ‘taking it over’.

Adding that extra ‘something’ to phone conversations is possible with the use of Emoji Maker: Free Personal Animated Phone Emojis. This is a different app from the previously mentioned Emoji Maker by Vic.art. It is one of the more popular apps in the avatar category, and functions as a complete replacement for the regular smiley faces. A personalized user experience turns this simple android app into a lot of fun. The only limit is the user’s imagination, and of course their current hardware.

The hardware requirements are slightly higher, but that is due to the high-quality graphics used for each emoji. In its current state, the Emoji Maker is best used on devices with hires screens. It really makes a difference when pairing up the emojis with compatible accessories. Social media and platform integration are average, with a surprising amount of support for any app that depends on android’s root software.

Now this particular app will raise a lot of eyebrows. User will have to separate the personal drama of the author from the brilliance of his app. By getting past that small roadblock, android users are treated to one of the best emoji makers in existence.

The cartoon made avatars are created by taking a picture of the user. The program then creates an animated version of that face to combine with 700 theme packs, thousands of cute emoji add-ons and many other extra features. Having access to the sticker function by itself is worth downloading and using the app. It’s amazing what Mojiking can do on old and new devices running the android system.

Exciting is the best way to describe Emoji Maker. The app does a great job letting users express their emotions in multiple different conversations. With Emoji Maker, users can visualize their inner monologue in the best way possible.

Following the lead of other emoji apps, this one keeps things simple without getting rid of fun features. It is a lot more automated than others, but does so without stripping the user of options. It’s simple, fun and fast to create an emoji of any type with this maker. The only other tool that comes close to this simplicity are the web-based avatar creators. It should be noted that Emoji Maker is more of a traditional creator, and will lack a lot of the advanced features of newer apps.

Having an emoji maker comes in handy when smartphone users need animated expressions. They’re fun, goofy and easy to use for all ages. While some are geared towards kids, there are plenty of choices for teens and adults. Making the perfect emoji or avatar will always start by having a compatible app.

How To Create A Boomerang From An Existing Video