It is quite difficult to decide between the Cricut Maker or the Silhouette Cameo 4 on which cutting machine gives you the best value for your money. Being premium manufacturers, crafters struggle to choose which machine to stack beside their craft collection. The Cricut Maker has been in business since 2017, while in 2019, the Silhouette Cameo 4 was released to the public with its price as its huge selling point. Let us identify each of their features to help you make that decision as to your main machine for 2020.

The Cricut Maker comes in more colors, sized smaller, and crafted in a sleeker design 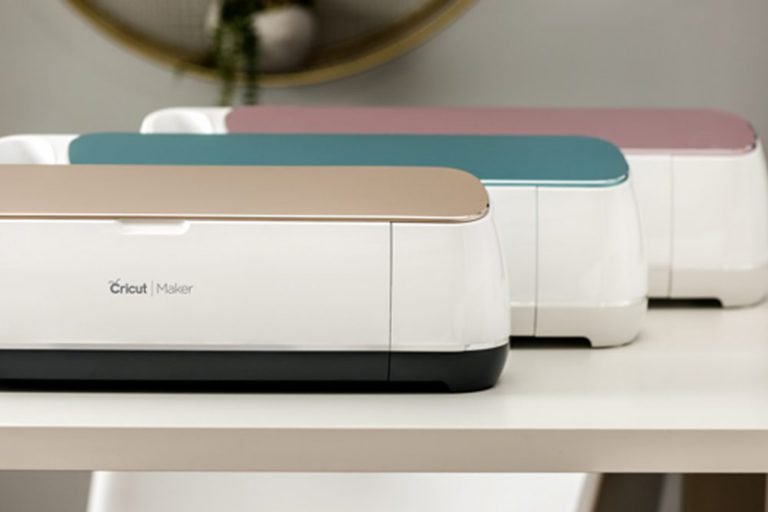 Design plays a huge role when consumers decide on a product. In this regard, the Cricut Maker triumphs over the Cameo 4 by a mile. The Cricut Maker’s sleek design and muted colors are appealing to customers. A wide range of colors to choose from such as blue, champagne, rose, lilac, mint, and white. The Cameo 4 comes in a limited number of shades namely pink, black, and white.

Utilizing your home space with a cutting machine is a factor worth considering. The Cricut Maker fits in most spaces and also comes with a docking station for your iPad maximizing your space even more.

In the past, the Cricut Maker is the leading cutting machine in the industry before the arrival of the latest Cameo 4. Most cutting machines are considered average with the downward cutting force. Both the Cricut Maker and Cameo 4 towers over those machines already with their speed and power, but the 4kg downward force of the Cameo 4 crushes what the Cricut Maker can do. The difference cannot be felt when working with fabrics or card stocks. However, when working with vinyl, balsa wood, and leather, which are usually thick materials, the additional force provided by the Cameo 4 is undeniable.

The Cricut Maker has been the industry-standard of being the only one packed with a rotary blade for several years. However, that all changed when the Cameo 4 features the newest AutoBlade. Regardless of its new innovation, the Cricut Maker still leads in the aspect of being compatible with several other tools that you may use. It takes a bit more getting used to when using the Silhouette Studio when compared to the friendly interface of Cricut’s Design Space. Design Space houses a larger stock of images, sewing patterns, designs, and fonts.

Flexibility when designing something from your own creativity, however, is utilized more with the Silhouette Studio. The various fonts and designs you can pick inspiration from are available with their software too. This implies that you are never hindered to release your creativity.

One thing to note however is that Cricut Maker’s Design Space for your desktop can only function with the use of a cloud service while the Silhouette Studio can be downloaded into your hard drive. A stable connection is necessary for Design Space to work. However, if your mobile phone uses iOS, they have made the version of the app available for offline use.

Silhouette Studio, on the other hand, is the best choice when internet connection may be intermittent especially for desktop users. Being new in the market, a lot of consumers have been reporting bugs but will surely get better over time.

The best value for your money goes to the Silhouette Cameo 4, but crafters who are just starting out will enjoy the Cricut Maker’s large selection of tools and intuitive interface

Each of these cutting machines poses features that make decision-making a lot harder.

Being the more affordable one between the two, the Silhouette Cameo 4 share similar features to that of the Cricut Maker. This is truly a better deal considering that power and cutting size options are to be introduced this 2020. Designers who have been working with cutting machines for a while also enjoy the freedom they get when designing.

However, the Cricut Maker is not going down without a fight with its software is more user-friendly, easier to set up, and a wider selection of tools to work with. Consumers who enjoy sewing and 3D projects will be happy browsing through the wide array of sewing patterns to choose from. With online tutorials being widely popular lately since the Cricut Maker has been out for a while, you will surely find more online to aid in maximizing the capabilities of the machine.